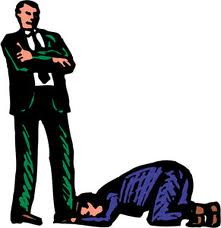 Having known my supervisors for nearly three years now, I continue to be amazed at just how much control they have over my inner happiness and optimism.

Back in the mists of time, when I passed my first year review (which I think is called an upgrade panel here at Warwick), I said I would never be afraid of them again.  This was based on the idea that if other examiners could look at my words and decree that I was bright enough to continue, then I should have greater confidence in my own abilities.  Because for most of that year, I had gone into supervision meetings (which took place monthly and were always with both of my supervisors, rather than just one) absolutely terrified of being told my work wasn’t good enough, or that I just wasn’t cutting it as a PhD student, or that I should go back to where I really belonged.  In actual fact, looking back, they never seemed to think any of those things – on the one occasion that I did descend into tears, it was mainly through my own frustration at not being able to get my first supervisor to understand my (allegedly/admittedly *delete according to opinion*) odd way of working.

So here I am, almost two years later, and writing words in the form of chapters (kind of…).  And like the child that I am, I continue to crave my supervisors’ approval.  I sent them some words (quite a lot of words, actually) last week, and they have both been beautifully positive about what I wrote.  This has made me full of joy, and optimistic that I really will get this thing done, and nice to my children, and even relaxed enough to pick up a novel rather than another paper on liminality.  I even had lunch with some friends yesterday, and I never once felt the need to calculate how many work hours I would have left after taking time out!

Is this common?  Are lots of us a bit childlike in our supervision relationships?  Or are there proper grown ups out there?  And by grown ups, I mean people who don’t feel obliged to grovel helplessly in the face of approval…

2 replies on “The power of supervisors”

Thankfulness to my father who stated to me concerning this weblog, this website is really remarkable.

I njoy what you guys are usually uup too. Thiss type of clever work and reporting!
Keep upp the awesome works guys I’ve included you guys to my own blogroll.