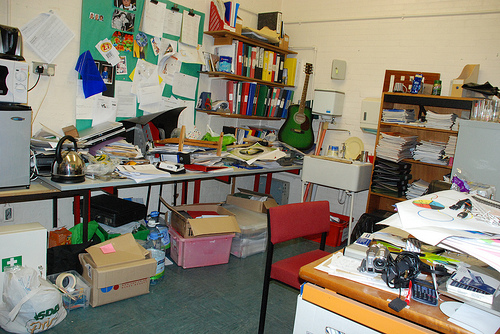 Last week, I wrote an entry which appeared to continue my theme of messy research, a pet subject of mine.  As I’ve said before, I’m quite drawn to the idea of keeping some essence of mess intact throughout the process, and even making it explicit in the final write-up.  It feels sort of honest, and I’m a tiny bit obsessed with being honest about the research process.  Mostly because I find it frustrating to read things that make the research process sound linear and uncomplicated – having chatted to so many people doing qualitative research, it clearly NEVER IS like that!  (That picture represents the inside of my head, not my office!)

Anyway, my friend and fellow Rex bod, Santi, wrote something on Twitter about my blog post, using the word ‘chaos’, and it reminded me of something I read right back at the beginning of this journey, which concerned chaos and creativity.  So I dug around, and have just found this quote:

“It is impossible to think unpredictably by looking harder and longer in the same direction.  When your attention is focused on a subject, a few patterns are highly activated in your brain and dominate your thinking… If, however, you change your focus and think about something that is not related, different and unusual patterns are activated” (Michael Michalko in his book, ‘Cracking Creativity: the secrets of creative genius’).

This really made me think about the problems I’ve had all the way through this research process.  Much of my difficulty has been related to a sense of being stifled in some way – you know, the thing about ‘This is how you write a thesis.  These are the chapters, and this is the order in which they appear’.  I’ve never been a fan of doing things a certain way just because that’s how it’s always been done (I was a very challenging student, both at music college, and later in midwifery *blushes furiously*), but equally I’m not arrogant enough to think that my way will be better than anyone else’s.  I just like to have the opportunity to look at things from a different angle and see where it takes me.

And I think that’s what I need to do just now.  I’ve been told to write my data chapters as intact pieces, and save the theoretical linkage for the discussion chapter.  But I don’t feel inclined to do this, so I’m going to go with the ‘stories within stories’ approach and try to see it differently.

I wonder where this will lead?  Maybe at the end of it I’ll just revert to convention and write in the easily recognisable chapter format, but I don’t think I’ll mind that, as long as I’ve had the chance to at least try something different along the way.  So here goes, I’m going to write the story of midwifery leadership…

2 thoughts on “Chaos, creativity and data: a clear connection?”