The other day, I unlocked a strange new achievement in the great computer game of life: I changed a tyre on my car. It all happened after a misguided attempt to inflate a slightly flat tyre at a petrol station no less than a sixty second walk from my flat, when I somehow managed to rip out the valve, and turn a slightly flat tyre into a very flat one. Various Internet acronyms come to mind, namely, FML (feel my lemur) and WTF (why the face?). 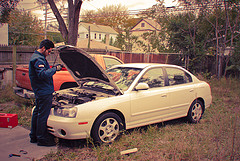 Anyway, I soon realised that I had no choice but to whip out the emergency tyre from the boot, and make the change. Now, I am not the sort of person who was born to do this. To say that I lack technical skills is a kind understatement; a friend of mine once destroyed a bookcase I had constructed with a single blow from a hammer (and that image you have in your head right now, of a series of painstakingly constructed shelves collapsing into a neat heap on the floor, well, it was just like that). But it was nevertheless apparent that, short of selling the car to the next person who pulled up to get petrol (and it is very hard to sell cars to people who are at that moment driving cars), I didn’t really have much choice.

So, after much loosening of screws and cranking of jacks, I managed to both change a tyre and ruin my favourite jumper with grease (hand wash with detergent and washing-up liquid: works a treat). The next morning I awoke early, reinflated the original tyre with a bicycle pump (who knew?), and put it back, this time without any help from the instruction manual.

I was as surprised as my family, and my flatmate, and my engineering friends. I had never thought of myself as the kind of person who could change a tyre, but in a dark Kenilworth garage at nine in the evening, I proved myself wrong. When I first started at Warwick as a fresh-faced undergraduate (and my word, didn’t the ravages of time hit me hard), I never saw myself as the kind of person to go on an exchange, but then I did…twice…in a row. You can’t second-guess yourself.

As chance would have it, a very talented and enthusiastic friend of mine is currently considering whether to do a PhD. The big question she is consistently asking herself is this: am I that person? She is certainly not the only person to go through this. I was the same mid-MA, looking at my battered brain, and thinking, no, this is a bridge too far.

But then you start, and after six months you cannot deny the fact that, out of necessity and a string of long days doing menial but important tasks, you are a PhD-er, embroiled in a PhD life. You have become that person, and no matter how much you doubt yourself, that is not gonna change. The problem is then that you look back, and rather than realising that some admirable metamorphosis has taken place, you put it down to luck, or chance, or fate. If someone had asked me a month ago to help them change a tyre on their car, I would have politely but forcefully told them that they had the wrong guy. Likewise, if someone told me five years ago I would end up doing a PhD, I would have looked them square in the eyes, and then turned away and silently left the room
.

I guess what I am trying to say is that you don’t know what you can do until you give it a try, and often you do not give it a try until you are forced to do so, until you dive right in. Maybe my friend will not end up doing a PhD, and will rather go off and do something equally admirable. But I am at pains to remind her that just because she cannot imagine herself as a PhD person does not mean that the ability, the sheer, sheer endurance that so many of us know so well, does not lie dormant inside her. As M People once sang, you gotta search for the hero inside yourself, only this time the hero is a humble graduate student. We don’t slay dragons, but we are pretty sweet around a PowerPoint presentation. Next slide please.

P.S. At the time of writing, I have just got off the phone with my mother, bless ‘er. I have recently been moving offices, at the same time as editing a chapter. I told my mother that I spent most of Thursday putting up shelves and carrying desks up stairs, to which she replied, ‘All you seem to do at Warwick is write on blogs and rearrange furniture’.

Someone once said that the average PhD is just the moving of dusty bones from one graveyard to another. That’s great, but since that phone call, I have realised it is much like moving furniture. You need other people’s help, lifts are nigh-on essential, and you will never be quite satisfied with the end result. But just as long as you can take a seat at the table without falling on your arse, you should be fine. Wise words, mother Bray, wise words.