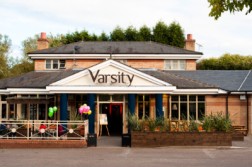 From Warwick to Oxford – A Little Bit of Who You Know Won’t Do You Any Harm.

Since I arrived at Warwick as an undergraduate in 2001, these are some of the things that I have done the following:

Gotten a BA in Politics, International Studies and Gender | Dyslexia diagnosis | Refined my thinking/learnt a lot | Won a teaching award | Set up a highly successful student society | Did loads of part-time work in catering, admin, research, careers service, teaching and as an academic coordinator | Made friends| Went on inter-rail | Galivanted about on a study trip to Berlin | Met my partner | Did an MA part-time| Had two children | Made succesful funding bids | Organised a post graduate conference | Published joint papers and solo papers | Ran workshops | Organised speakers | Completed my PhD | GOT A RESEARCH POST AT OXFORD UNIVERSITY!

When I arrived at Warwick in 2001 I was 24 years old (a mature student) with no A-levels, half a dozen GCSEs and an Access to Higher Education certificate. Now in November 2013 I am preparing to (finally) leave Warwick to take up a research post at Oxford University, and leaving has put me in a reflective mood. In an attempt to work out how all ths happened, ive realised that the relationships I have built here have been instrumental in generating opportunities.

Unlike the stereotypical academic, I love engaging with people. The most productive moments during my PhD were when I was in the Wolfson Research Exchange, surrounded by my peers from different disciplines. Looking back at my time here at Warwick, every job opportunity has come about from my networks. As an undergraduate I was aware that I should be ‘networking’ (cringe) and getting loads out of the Student’s Union. However, with all the paid work I had to do and the extremely challenging course material I had to grapple with, I didn’t have the time or the confidence to ‘network’. It wasn’t until I was a postgrad that I suddenly felt able, and then decided that I would actively shape my networks in a way that felt natural but was still purposeful. I have been strategic in how I use my time and whom I give my time to; I also have an eye on where things might lead. But I have neither aligned myself with people I don’t like nor generated projects with people who I think are powerful or useful, without also being committed to them or the project. All of my key moments at Warwick have been down to the relationships I have built with my peers and those higher up the university chain. A good example is when I got a summer research assistant post at the Medical School, which has ultimately led to my current post at Oxford (oh and meeting my partner along the way).

This sort of behaviour sounds suspiciously like ‘networking’. To me it sounds instrumental and even socially disingenuous however I am genuinely interested in talking to people and finding out about them and their work, but I don’t get jobs and opportunities just because I am nice and chatty. I am good at the work I do. Most of the opportunities seemed serendipitous, but on reflection it’s not that I somehow just end up being in the right place at the right time. I made conscious decisions to work out what was going on and where; I look for the connections when I meet new people and take part in projects that I find interesting.

I took longer than average to complete my studies here at Warwick, but I would have missed out on all of the other things that I did here had I gotten my PhD done sooner. It was my connection to people in conjunction with my PhD that got me the job at Oxford. I was lucky and got a break, but I generated that luck by nurturing and investing in the relationships that I made along the way.

Academia is competitive, especially within the Russell group, everyone who stands a chance has a PhD and a publication record but I think that meeting as many people as possible, talking about your work, listening to others and getting involved in your community is a really good way to gain opportunities that can lead to amazing things.  So if you are a Warwick PhD student and you haven’t bought into the idea of ‘networking’ then think again and get yourself into the Wolfson Research Exchange, it’s a very good place to start.